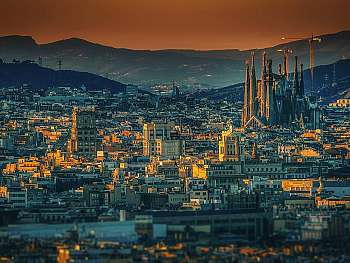 Upon arrival you will be met with IBMT Tours Europe representative and will be transferred to the hotel.
Rest of the day at leisure. Overnight Barcelona 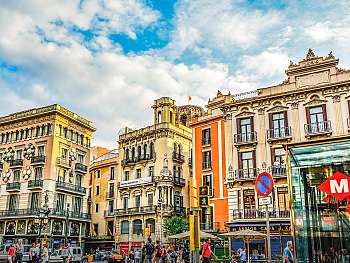 Breakfast at the hotel. Call on IBMT Tours bus terminal (Balmes, 5) at 08:00 for a morning Highlights city tour of Barcelona. Half-day sightseeing tour around Barcelona that will allow you to discover the history of the city while visiting some of the most important places in a comfortable and easy way.  The first part of the visit consists in a guided walking tour through the small and narrow streets of the Gothic Quarter, the oldest part of the city. During this early visit we will see Las Ramblas, de Cathedral Square, The Cathedral (free time to visit the Cathedral by yourself), the Old Jewish Quarter, among other interesting places. Later we will take our bus to start with a panoramic tour around the rest of the city. We will pass through the elegant Passeig de Gràcia Street, where there are located two of the most important Gaudi’s buildings (Casa Batlló and Casa Milà “la Pedrera”), the Triumph Arc, the Olympic Village and the Olympic Port. For the next part of the visit we will access to the Montjuic Mountain. This is an important place because was the main scenery of the Olympic Games in the 1992. We will see the Olympic stadium from the bus and later we will have the opportunity to enjoy the panoramic views of the city riding the aerial tramway (subject to the weather conditions). For the next part we will go to the Spanish Village (Poble Espanyol) that consist in a synthesis of all the cultural variety in Spain. During the visit you will be given some free time to enjoy the different areas inspired in different Spanish regions, where you will find craft shops restaurants and bars. At the end, back to the bus, we will leave Montjuic and come back to the city centre passing through España square, the twin Venetian towers, the MNAC and the Shopping centre Las Arenas, build in an old bullring. We will arrive to Catalunya square, and we will end up the tour.

Note: January to March (dates to be confirmed) the cable car doesn’t work due to revision tasks, this service will be replaced by a tapas tasting in Spanish Village.

Afternoon is at leisure to enjoy this wonderful city and surroundings. Accommodation at the hotel. Overnight Barcelona. 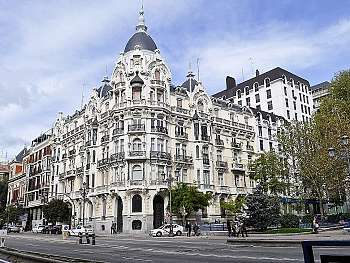 Breakfast at the hotel. Transfer to Sants train station to depart by AVE, high speed train, at 9:00 am to Madrid. Enjoy the journey with the comfort and operating speed of this AVE train. Arrival at 11:45 am. Transfer from station to your hotel. Balance of the day at leisure. Accommodation at the hotel.  Overnight Madrid. 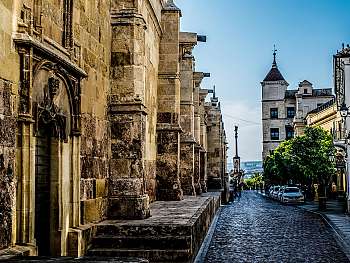 Breakfast at the hotel. Transfer to IBMT Tours bus terminal, located in the underground parking of the Plaza de Oriente. Departure at 08:30 a.m. Drive along La Mancha, Don Quixote’s land. Brief stop at typical site in Puerto Lapice. Cross through the natural border of “Despeñaperros” and get into Andalusia, a region for itself that shows an enormous heritage from a splendorous past. Reach Cordoba. Impressive tour of its Mosque and other sites that will ease our mind and spirit strolling through its narrow winding streets of the Jewish Quarter. In the afternoon, after a short two hours ride reach Seville. Dinner and accommodation at the hotel. Overnight Seville. 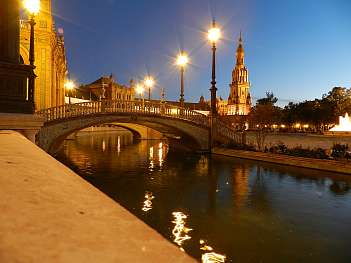 Breakfast at the hotel. Morning panoramic city tour visiting: the exterior of the Cathedral (the second largest in the Catholic world after St. Peters in Rome), Santa Cruz quarter (a natural scenario of “Carmen” as well as a precisely where the myth of “Don Juan” developed), Maria Luisa Park and Plaza de España. Afternoon at leisure for you to discover exclusive views, specific flavors of this active full of light city. Dinner and accommodation at the hotel. Overnight Seville. 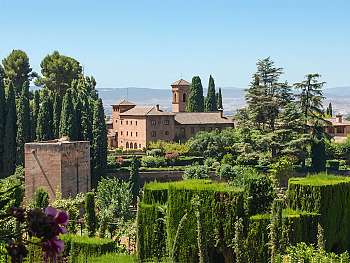 After breakfast at the hotel drive east through the Caliphate road to the heart of ANDALUSIA observing an endless number of olive trees on the way to Granada and its incredible and amazing monumental environment, last stronghold of the Moorish Kingdoms up to 1492. Visit the world famous Alhambra complex and Generalife Gardens that have inspired several authors with its sound and sights, such as the “Tales of the Alhambra” by W. Irving. Dinner and accommodation at the hotel. Overnight Granada 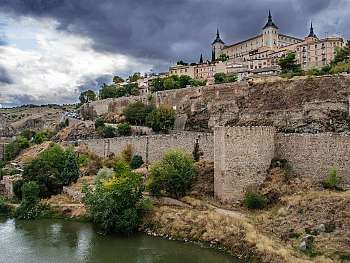 Breakfast at the hotel. Drive northward where it emerges, toward the sky of Castilla and surrounded by the Tagus River, the impressive Imperial city of Toledo –World Heritage City- where the three cultures Christians, Moorish and Jewish, have lived together. Resume of the Spanish art, history and spirituality the whole town is a National Monument. Short guided tour of this historical old town through its narrow streets. Then proceed with a visit to a famous “Damasquinado” (gold and silver inlaying in iron) factory. Continue to Madrid. Accommodation at the hotel. Overnight Madrid. 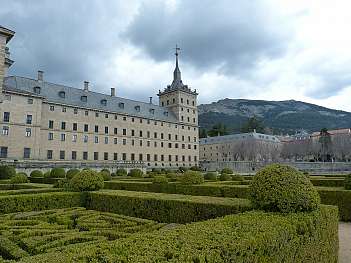 After breakfast at the hotel transfer to the airport. END OF OUR SERVICE.

HOTELS: 4 STARS Plus - SUPERIOR PLUS

Seville Cathedral and Boat Trip on the Guadalquivir -
We will visit the Gothic Cathedral with the largest area in the world, declared a World Heritage Site by UNESCO in 1987. Its construction dates back to 1401 on the site where the old Aljama Mosque was located, of which the "La Giralda" minaret, the symbol of Seville, is preserved. , with the possibility of climbing to its 104-meter bell tower and contemplating the best views of the city.
We highlight, among others, El Patio de los Narajos and the Tomb on the pedestal of Cristobal Colon.
Followed by an hour boat ride on the Guadalquivir River, the river of the great waters and the main port of Spain in the Indian campaign, which will allow us to contemplate and admire the fine silhouette of this magical city.

Flamenco with one drink -
The emblematic neighborhood of La Macarena, with old buildings from the XIX c. of a typical Sevilla Palace House structure, receives our show. This a place where art, magic and passion come together to come alive in our tablao and to show all lovers of flamenco the depth of its roots, the feeling of this land the sensitivity of their interpreters.
It includes one drink per person during the show.

Gipsy Flamenco show at Sacromonte quarter(Cave’s flamenco show ) -
The Temple of Flamenco is a stunning cave divided into three naves, creating form of cruise, that lead to a large central area where is located the stage, elevated one meter above the ground, to favour the visibility from any point of the cave. The flamenco show that you can enjoy in this cave of the Albaicin is full of strength and beauty, led by the charismatic Granadian artist Antonio Vallejo. It makes a tour of the most rhythmic clubs in this art, as: Flamenco tangos, bulerías, alegrías, guajira and soleá or segurilla, alternating these numbers of dance with others of flamenco signing & guitar solos.

Historical Granada -
A journey from Islam to Christianity where we show the exciting transformation of a city as mythical as spectacular. Walking through the Albaicin (World Heritage Place) is a trip to their Moorish roots ad a pleasure for the senses. Crossing its labyrinth of narrow streets scented with jasmine, overlooking the gardens of Cármenes, are experiences that visitors should not miss. The ivy and bougainvillea hang off the whitewashed walls. Inside of them, beautiful gardens and fruits trees make the Cármenes small farmhouses

Granada City Tour -
The Granada City tour is the new touristic train of the city.  It offers a scenic route with the best views of Granada and audio guide in 12 languages. The ticket lasts all day and you can go on and off as many times as you wish.